Aslı Kıyak İngin Architect, Designer and Activist.She has graduated as an architect from Mimar Sinan University, and got master degree from Istanbul Technical University. She is the head of the Human Settlements Association. She is involved several projects in different fields in city, architecture, design, art and production. “Made in Şişhane”, one of her projects, is about an alternative approach for the city, creativity and small scale manufacturing. She is working for the Sulukule Romany Neighborhood which was evicted by the renewal process of the municipality during the last three years in Istanbul. aslikiyak[at]celikdizayn.com

Ayşim Türkmen is an urban anthropologist and documentary filmmaker. She studied sociology at Bosphorous University and completed M.A. at New York University Near Eastern Studies Department, concentrating on urban anthropology. She is teaching urban anthropology at Yildiz Technical University. She is making the radio programme Metropolitika with Korhan Gümüş at Açık Radyo. She is making documentaries about cities (KAPITAL-ISTanbul(2004), Galata Tower Street No:23(2007), especially concerning with the effects of urban transformation on the everyday lives of citizens. aysimt[at]yahoo.com

Ayça İnce studied urban and regional planning, received her MSc from “Cities, Space and Society Programme” in LSE (2001), and her MA from Sociology Department in Mimar Sinan Fine Arts University (2003), where she is still pursuing her Ph.D. Currently she is working as the project coordinator of “The Invisible Cities: Building Capacities for Local Cultural (Policy) Transformation in Turkey” and a part-time lecturer (“Audience Development” and “Arts, Culture and Community” courses) at Istanbul Bilgi University. aycai[at]bilgi.edu.tr

Alev Erkilet Sociologist, graduated from Hacettepe University, Department of Sociology. Worked in the same department as a lecturer for nearly 13 years and then in Kırıkkale University as an associate professor. Her phd was about modernization and islamic movements in the Middle East. Because of this text and with the effect of 28 February semi coup d’état she was dismissed from public work in 2000. After then she worked in some research projects and especially in the Historical Peninsula Qualitative Research Project of the İstanbul Metropolitan Municipality. During this research Project nearly 1270 Peninsula inhabitant and visitor was questioned by indept interviews and focus goup meetings and 40 participant observation was realized. aleverkilet[at]yahoo.com

Didem Danış teaches sociology at the Galatasaray University, Istanbul since 2005. Her fields of specialisation are urban sociology and international migrations. In addition to migration issues, she studies new gated communities in Istanbul and various forms of urban fragmentation. didemdanis[at]yahoo.com 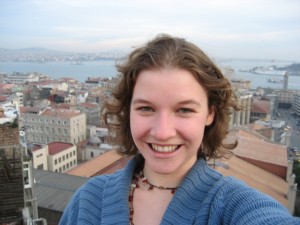 Julia Strutz studied sociology at Humboldt-University Berlin and did in MA in comparative urban studies in Urbino and Brussels. She is now in the process of finishing another MA-thesis on the
neighbourhood ‘Süleymaniye’ at Istanbul Bilgi University, history department. Urban history and its (postmodern) renewal in the global city challenge is one of the topics she is interested in. julia.strutz[at]gmx.de

Katharina Sucker graduated from Bauhaus University, faculty of architecture with a ma in architecture. She is now working on a phd research project about gated communites in Istanbul in the backdrop of urban fragmentation and new forms of socio-cultural practises in the global city. Her main academic interests are urban semiotics, global cities and _architecture without architects_. kat_ontheroof[at]yahoo.co.uk

Orhan Esen , studied social and economic history at the Bosporus University Istanbul, and history of art and architecture in Vienna, his political and intellectual focus being ‘historio-geography of built environment in Istanbul’, with its social, political and ecological impacts. He is based as a freelance researcher, writer, lecturer, and publisher in Istanbul supporting academic, civic, and media institutions; as a tourguide conceptualizing and implementing field trips and workshops within his field of expertise. He has co-edited with Stephan Lanz the book ‘Istanbul: Self Service City’ (b_booksz, 2005, 2007) about the making of the megapolis through informality, respectively in periods of nationally and globally determined economies. orhanes[at]superonline.com

Pelin Tan studied sociology, philosophy and art history, works at the Institute of Social Sciences, Architecture Faculty of Istanbul Technical University since 2001. Her fields of specialisation are contemporary art and related globalization issues in context of space production, conflict spaces and architecture. In addition to her academic fields she is extensivly involved with alternative art publishing. She is the editor of Muhtelif contemporary art magazine, co-editor of contemporary art and public space with S.Boynik (Bilgi Univ.Press, 2007), her book “Derrida’s notion of Hospitality and Architecture” (forthcoming, Disko, a42.org, Nürnberg /Germany, 2009). pelintan[at]gmail.com